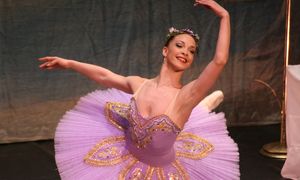 On November 3rd  Chequer Mead, East Grinstead, played host to the inexhaustible Vienna Festival Ballet for the first of two performances of ‘The Sleeping Beauty’. The story of Princess Aurora who pricks her finger on a magic spindle that sends her to sleep only to be woken one hundred years later by a handsome Prince proved a marvellous inspiration for Marius Petipa’s ingenious choreography. Add the glorious music of Tchaikovsky to the mix and you can understand the enduring charm of this work.

The Vienna Festival Ballet are celebrating their 30th anniversary this year. During this period sumptuous costumes and lively dancing have become their trademarks and there was plenty of both on offer here. Herne Bay’s own Melanie Cox was an alluring Aurora; graceful and elegant she held her arabesques well in the notoriously demanding ‘Rose Adagio’. Sadly she didn’t receive much support from her Prince, Alexis Malovik, who seemed curiously disinterested in proceedings and was generally sluggish in his movement. No matter, there were plenty of other excellent performances to admire; a delightfully hussy-ish Ellodie-Lark Stott stood out as the evil fairy Carabosse and Emily Hufton was constantly pleasing as the Lilac Fairy. The most convincing dancing, however, was saved for the final act; the beguiling ‘Pussy Cats’ pas de deux and the skittish ‘Red Riding Hood’ vignette were both particularly warmly received by the audience.

By the end of this captivating show there was already a great deal of anticipation towards the Vienna Festival Ballet’s next appearance at Chequer Mead (May 18th & 19th 2011), when they’ll be performing a new production of Cinderella set to the music of Rossini. I’m sure it’ll be just as lovely to look at, there’ll be even more terrific dancing and, hopefully, a more inspiring male lead.