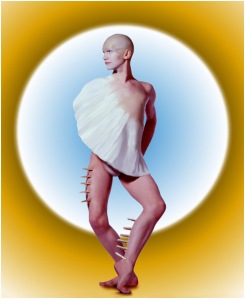 Life's a beach. The Michael Clark Company shell out for one of Nash's pics. Photo by Chris Nash.

Hidden away in the deepest recesses of London’s V&A museum, just through the shop, right along the courtyard, up the stairs and past Jewellery, you’ll find the Theatre & Performance section and, until August 29th 2011, an exhibition of one of the UK’s finest Contemporary dance photographers, Chris Nash. You’ll find his work regularly pinned to the walls of Sadlers Wells advertising the wares of the Rambert, Richard Alston and Phoenix companies, to name but a few of the illuminaries of the British New Dance scene that utilise his creative eye.

Covering 30 years the exhibition is not as comprehensive as might have been expected but this is generally to the better as it allows the photos on display room to breathe. Like most of the dance-works photographed there is no apparent narrative, or even chronological, order in the images’ layout which leaves them to be judged on their own merits – another good thing.

Nash specialises in striking images that often step beyond the standard dancing man/woman jumping/posing and incorporates strong doses of humour (New Art Club in the loo wearing zipless spandex body-suits), surrealism (Teresa Cholmondeley’s head plonked atop a giant hand [pictured left]) and politics (the closed-eye women hovering over Tiananmen Square in Chinese Takeaway that was banned by the authorities from his exhibition in China).

His bread and butter promotional work, though, is equally impressive. His best stuff is in colour; bright, bold and daubed with great splashes of photoshop, these are images that demand your attention, where the space outside the body is as important as the energy contained within it. Beyond the exhilaration of movement however, Nash habitually captures the dancer at the fleeting moment where they start to fall back to earth light-seconds after the apex of their leap, often creating a sense that all is not well, a certain sadness of ageing.

This is an excellent exhibition, free to enter, and is accompanied by an informative short film showing Nash shooting on location, working his enhancing magic on the PC and, most unusually for a photographer, going through the process of picture selection. There’s plenty here for dancers and photographers alike; he can make a picture of two men wearing shirt and trousers standing still in a room look like a dance photo for God’s sake (Speaking Dance, 2006). He’s either a genius or the devil incarnate.

This entry was posted in Exhibition Reviews and tagged Chris Nash, review. Bookmark the permalink.