Cats, Cross-dressers and Chiming Clocks. All in a day’s work for Cinderella. 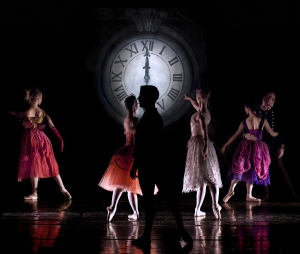 Let's face it, it's time Cinders clocked back to her kitchen. VFB's Cinderella is worth a watch.

The Vienna Festival Ballet pirouetted into Chequer Mead last week bringing a sparkling new version of Cinderella with them. A tale of two halves, the first featured plenty of knockabout humour, an enchanting yellow cat and two very ugly sisters indeed. Joseph Mackie-Graves and Carl Hale almost stole the show as the facially challenged dames; comically funny but also displaying some very impressive pointe work (not to mention that Mackie-Graves had a pair of pins to make many a lady jealous).

After the interval Sheila Styles’ pure dance choreography took centre stage. With the girls in beautiful new tutus there was a lovely sequence of ensemble set pieces and a shimmering pas de deux between Cinders and her Prince. The undoubted highlight, though, was Vince Smart’s superb solo which was punctuated with some sharply executed twisting leaps.

Emanuela Atzeni, on the other hand, was at times uncertain in her movement but otherwise made an engaging and alluring Cinderella while Sergi Terns Goma was a reassuringly regal presence as Prince Ramiro. Emily Hufton popped in when required to add a touch of glamour and magic as the Fairy Godmother and the rest of the company provided energy and poise in their many roles.

Chris Nicholls’ specially arranged orchestration of Rossini’s music suited the dancing well, creating a merrily light-hearted accompaniment to bring out the charm of this heart-warming tale.

The Vienna Festival Ballet return to Chequer Mead on November 2nd with a new production of The Nutcracker which, on the evidence of tonight, should be great fun.