Let’s hear it for the girls 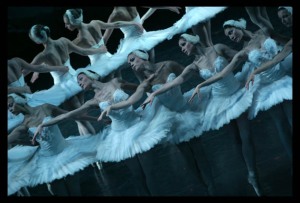 Corps blimey, we did good. Moscow City Ballet dancers ask for new rings as a reward.

The bright and colourful Moscow City Ballet breezed into Richmond with two of their most popular shows: Swan Lake and The Nutcracker.

Thursday’s Swan Lake saw the elegant Liliya Orekhova floating gracefully into the role of Odette-Odile. With effortless extensions and tremendous purity of line she was a touchingly vulnerable Odette and her black swan was wicked enough not to want to meet it down a dark alley.

Equally eye-catching was Valeriy Kravstov who was an energetic Jester. His acrobatic leaps were superbly strong and he nearly boxed his own ears off with his high kicks.

The corps of swans was excellent too, highly disciplined and attractively choreographed by Smirnov-Golovanov, but the soloists in the national dances were a little ragged. The ending was rather botched; did our young lovers die, or did Von Rothbart, or all of them?

Woolly storytelling was a bigger issue in the following night’s Nutcracker. Whereas most Nutcrackers’ stroll along at a leisurely pace in the first act, this one bolted about in a flurry of arms, masks and circle dances. The result was chaotic, confusing and capped off by an irrelevant tug of love between Drosselmeier, the Prince and Clara.

Fortunately things settled down after the interval. The soloists were in good form and the corps was again poised and attractive in the Waltz of the Flowers. All things in The Nutcracker, however, lead to the grand pas de deux and Alevtina Lapshina and Talgat Kozhabayev were terrific. Lapshina is a charming dancer, lovely to watch and delicately balanced. Kozhabayev is an excellent partner (just like he was for Orekhova in Swan Lake) and possesses a decent leap. Together they made the night.

Both shows presented lovely costumes and some impressive backcloths. The orchestra, though by no means perfect, offered a vast improvement over their performance of Romeo and Juliet at the same venue last year.