Let’s hear it for the boys 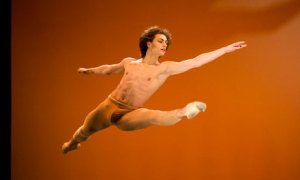 It wasn’t so long ago that Ivan Putrov left the Royal Ballet under the puff of a dark cloud. This week Sergei Polunin left under a thunderstorm of hail and lightning and promptly stole the applause in this new show from under its creator’s nose.

Men in Motion is Putrov’s study of the development of the male dancer’s role over the last hundred years. Taking Fokine’s legendary Le Spectre de la Rose as its starting point this was a show that refreshingly steered away from power, machismo and bravado and instead celebrated subtlety, restraint and beauty.

Mariinsky principle Igor Kolb had the dubious honour of performing Nijinsky’s flower. The piece hasn’t dated well and no amount of gigantic leaps and quivering arms could overcome the horror of Kolb’s baby pink bodysuit and belle-epoque bathing cap.

Sergei ‘Tattoos’ Polunin strode on next to show off Kasian Goleizovsky’s Narcisse (ah, the irony) and he was superb. Taking flight with purpose and authority he took absolute control of the theatre and received an outstanding reception. It would be a tragic waste indeed if, as has been suggested, he were to give up dancing so young.

In an unlucky piece of programming Putrov found himself on next in Dance of the Blessed Spirits but Frederick Ashton’s featherweight touch left him with no chance after Polunin’s plutonic blast of one-upmanship.

But a funny thing happened after the interval. The relatively unheralded Argentinean Daniel Proietto went and upstaged even Polunin in Russell Maliphant’s beautiful AfterLight (Part One). Set to Satie’s Gnossiennes it begins with Proietto gently turn-tabling in a revolving pool of light. Thereafter he expands out onto the exquisite floor projections of clouds and dappled water until he’s sucked back from whence he came. An incredible performance.

There are many problems with Men in Motion. The pacing was off-kilter (the first half was a mere twenty minutes long and that included at least five minutes staring at a blank curtain between works). To have Kolb and Polunin twiddling their thumbs off-stage 90% of the time was a criminal waste of talent. The programming is bizarre; different days have the pieces in different orders and you can only see an extra Igor Kolb solo if you’re attending the final show. However, its heart is in the right place and it’s gratifying to see Putrov intelligently presenting the oft-maligned male dancer in a more considered light.