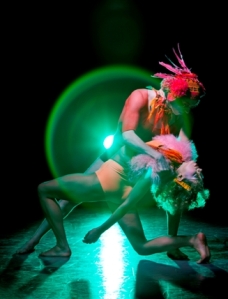 His come-to-bed eyes always knocked the ladies out for six. Rambert Dance Company indulge in some Wild Ecstasy. Photo by Eric Richmond

With three giant wasps dangling from the roof it was immediately clear that the London premiere of What Wild Ecstasy, Mark Baldwin’s luminous response to L’Après-midi d’un faune, was not going to be your run-of-the-mill contemporary drudge-fest. Bedecked in funky headgear, hot-hued waistcoats and tight-tight shorts the Rambert dancers buzzed around to Gavin Higgins’ caustic score, initially to no great effect. However, a tenderly sensitive series of languidly erotic duets spliced up the affair and saved it from overwhelming garishness. Then everyone sat down in a circle and the wasps let loose a barrage of pollen/eggs/poo which left the stage in the semblance of a sunflower. Not a wholly successful work but certainly one not easily ignored.

Siobhan Davies’ excellent, if overlong, The Art of Touch, was magnificently performed. It’s full of inventive choreography, including some quite extraordinary strobing jabs from Pieter Symonds and Gemma Nixon, and concludes with an imaginative evolutionary line-up.

It was, however, the UK premiere of Itzik Galili’s Sub, an extended sequence of mostly ensemble set-pieces for seven stripped-to-the-waist male dancers, that took the laurels for the evening. With a deft sprinkling of swooping capoeira kicks it demonstrated the elegant strength and poise of the Rambert men in a display full of rock-solid dancing.