Learning to live in the moment 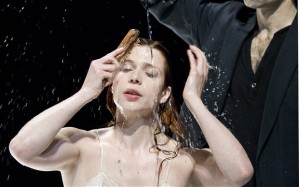 I’m gonna wash that man right out of my hair. Anna Wehsarg gets a little wet behind the ears. Photo by Bo Lahola

Another day, another city. This time Tanztheater Wuppertal Pina Bausch whisked us off to a very barren-looking Santiago de Chile. Apart from a floor that occasionally cracked open without reference and a couple of short film projections, the stage was a black canvas. This meant that Marion Cito’s frocks stood out brighter than ever but also put more pressure on the performers to impress.

There’s lots of dancing in …como el musguito en la piedra, ay si, si, si… but this is not necessarily a good thing as the palette that Bausch used was frustratingly restrained. Because she rarely has her dancers duetting there’s an over-reliance on similarly claustrophobic solos. It’s a shame because in the occasional brief encounters where partnering does occur, such as when Aleš Čuček twists Pablo Aran Gimeno around by the ankle or Silvia Farias Heredia sways and leans into Damiano Ottavio Bigi to exit the stage, there’s a real choreographic invention that often fails to materialise in the solos.

Still, there are many memorable moments; a woman is swung strangely but beautifully around on the end of a pole, a man elegantly catches the constantly rotating arm of his lover to kiss her hand and a Brasilian chica whips off two guys tops, sits on top of them with the sauciest of grins and forces them to do press-ups.

Created in 2009 and premiered shortly before Pina died, the humour in …como is gentler than other Bausch pieces and the mood is often solemn, although sexual tensions are generally less frenetic. The excellent array of music sashays sedately from bolero to folk to pseudo classical with a bit of Latin-funk thrown in. And there were mercifully few pan-pipes.