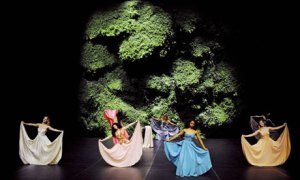 After thirty-four days of wonder, mayhem and delight, Tanztheater Wuppertal Pina Bausch’s World Cities 2012 finally called a halt at the rather amorous Budapest.

As a conclusion to a series Wiesenland was understated, lacking much of Bausch’s customary innovation and provocation, but it was enjoyable enough once it got into its stride.

The tower of chairs that two dancers circled through was forbidding, the one two three one two three ensemble was as lovely as its ringleader Eddie Martinez felt it would be and the woman hung up to dry on a man’s feet was worth the weight.

However, we’d seen the water-fight before in Agua (although Wiesenland chronologically comes first) and there’s only so many times a person can pour a bucket of water over someone’s head before it starts to lose its fascination, even if the drownee is puffing away on a cigarette.

Peter Pabst’s mossy cliff-face dripped pretty little water droplets through the first half before tilting disturbingly and transforming itself into an unkempt hillock. It was one of his least successful stagings; none of the dancers quite knew what to do with it and it sat sullenly on the stage like a defrosting broccoli.

Keeping the dance fans happy was an excellent arm-tugging solo from Pablo Aran Gimeno, an intertwining duet from Barbara Kaufmann and Rainer Behr and a gambolling chimpanzee run-around from Jorge Puerta Armenta.

In truth Wiesenland, interesting though it was, felt a little like the warm-down after the main event. But what a main event. World Cities 2012: it was a privilege to be there.