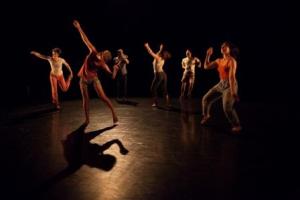 So much to look forward to. Seke Chimutengwende’s The Time Travel Piece. Photo by Benedict Johnson

The last semi-final of the 2012/13 The Place Prize wandered creatively all over the  joint. A very cross-looking Martha Pasakopoulou rushed on first with a dangerous yell in Eva Recacha’s The Wishing Well. The piece somewhat ponderously appeared to tell the tale of Martha as she developed from a young girl with issues over the number ten to an old woman leaving the stage bent over having not wished so well. It had some intriguing moments, such as when Pasakopoulou swished along to the accelerated narrated sound of the word wish, and it was never quite clear if fate was leading her or her fate. A great performance from Pasakopoulou, however – so good, in fact, that the judges chose The Wishing Well to go on to the final.

My head initially wanted to dismiss as pretentious noodling Robbie Synge’s Settlement, a rather aimless portrait of a man trying to arrange three boards of plywood into precarious sculptural shapes while a cohort ceaselessly thwarted his intentions by knocking them back down. But my heart gradually warmed to the precise timing and gentle humour that Robin Dingemans and Erik Nevin brought to the piece. Not sure I’d rush to see it again, mind.

Third up was Third, a work Goddard Nixon crammed full of dancing. Slabs of classical, capoeira and break-dancing, among other things, tried to show the trials and tribulations of a funkily dressed couple all adrift in a sea of light. Superbly danced by the choreographic duo themselves any intended message or emotional content tended to get smothered in overwrought, flat-handed love me/hate me expression.

The night’s winner of the audience vote was both clever and funny. Seke Chimutengwende’s The Time Travel Piece was an imaginative look into the future of human thinking, of dance and of The Place itself. Having recently undertaken time travel himself, Chimutengwende recreated the dance he’d seen in various years of the future, talking us through the concepts behind them and, in doing so, neatly took the piss out of the over-conceptualised nonsense prevalent in some quarters of today’s dance world. Sadly, the piece failed to make the final (Chimutengwende should have seen that coming, really, a simple trip to April 2013 would have done the trick) but I hope it finds a home somewhere, although preferably with a shortened demonstration of the minimalist year 2085 and a few extra years added.

In the bar afterwards the finalists for the prize were announced, all of which will fight it out in the finals that take place from April 17-27 2013. The winners are:

Tickets are already available and can be booked here.