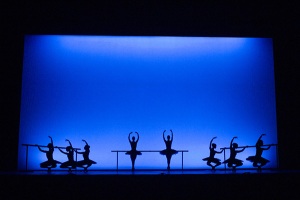 The English National Ballet have a bit of a thing for ecstasy. After the Agony & Ecstasy of the documentary TV series about the company a couple of years ago comes an entirely unconnected Ecstasy and Death triple bill. Well-planned and well-executed it bobs unexpectedly about between varying ballet styles and does so with great aplomb.

Opening affairs was the company’s exciting first stab at Petite Mort, Jiří Kylián’s thinly-veiled 1991 examination of the darker side of sex. It begins with six men in strangely attractive big pants swishing swords about and evolves into as beautiful a piece of work as you could wish to see. The men soon rush forward with a massive silk sheet which unfurls ravishingly to reveal six women waiting for partners. Sensual duets follow with piercing crab-like limb extensions which, though performed relatively quickly, somehow melt wonderfully into the adagio movements of a couple of gorgeous Mozart piano concertos. There’s also a wonderfully comical moment where the women roll out onto the stage in big dresses with whopping great panniers and start whizzing around as though on electric scooters.

Last up and starting with a single plié, Harald Lander’s Etudes slowly transforms into an almost full-blown grand défilé. In between, the dancers progress from mechanical reproduction of steps at the barre to pinging about the stage in repeated combinations and sequences that demonstrate the entire classical vocabulary. Some beautiful effects are created by Lander with simple group arrangements that are punishingly difficult to perform; James Forbat spin spin spinning in front of six revolving girls was a joy to behold, as were the chorus lines of women flexing their talents in class. The finale where the stage is crammed full of dancers all leaping and turning simultaneously with Knudåge Riisager’s oompah whack of a score was a real hair-on-the-back-of-the-neck moment. A terrific night.

Ecstasy and Death runs at the London Coliseum until 21 April 2013 and tickets can be found on the English National Ballet website.