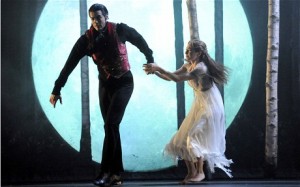 If you go down to the woods today you’re sure of a big surprise. As Hannah Vassallo has just found out in Matthew Bourne’s Sleeping Beauty. Photo by Alastair Muir

In the grand tradition of Matthew Bourne shows Sleeping Beauty is an entertaining affair. As always, it’s wonderful to look at; Lez Brotherston’s fangtastic Gothic staging doesn’t spare the dry ice, nor stint on the size of the moon or understate the drapery. The costumes are fabulous too, highly detailed and imaginatively administered and the cast perform their roles with expertise and enthusiasm.

Unusually for Bourne, though, the storytelling is a bit muddled. The central idea is a good one; setting the birth of Aurora in the late 19th century, at the time when Tchaikovsky was writing his famous score, may be borrowed from his own take on Cinderella, but it works again here by consequently setting Aurora’s awakening in the present day. However, despite a brief interlude of some modern-day urchins taking photos of each other on their mobiles, he doesn’t really follow through in bringing the story into the 21st century in the final act, preferring to focus on a Twilight-y sacrificial wedding instead.

There’s also quite a lot of filler. The fairies/vampires appear unannounced while Aurora’s still a baby and spend quite a while performing pretty enough dances on conveyor-belts to no apparent end. Similarly, once Dominic North’s excellent Gamekeeper finally gets into the castle after his 100 year sojourn precious time is wasted as lots of half-undressed people waft around in blindfolds.

Bourne also chops Tchaikovsky’s score about a bit, often to good effect; shifting the climatic Rose Adage from Aurora’s entrance to the moment where she pricks her finger was a superb idea, harnessing the full power of this quintessential Romantic melody. He tweaks the story an ‘all. By subverting the awakening scene he cleverly gives narrative legs to what can, in the wrong hands, often be a tediously pointless wedding scene.

Hannah Vassallo made a lovely Aurora. A lively actress with a gentle lyricism in her dancing she really was someone you would want to wake up. Her closing duet with North was a beautifully intimate thing and the moment she ran her face along his wing to a short piano trill was absolutely perfect. Christopher Marney as Count Lilac and Adam Maskell as the dastardly Caradoc were both compelling viewing and the demonic puppet baby was great.