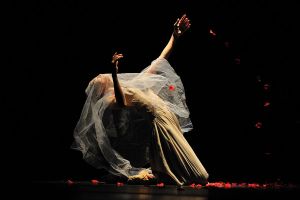 Review now available by clicking here. Who’d have thought it? It seems that Charlotte Bronte’s Jane Eyre is a hugely popular story in China. So much so that a play was made of it and, as direct result of that, a ballet has now been created too. And it’s coming to London’s Coliseum in August 2013.

Jane Eyre was created by choreographer Patrick de Bana for Shanghai Ballet and it is they who are bringing it London for their UK debut. Shanghai Ballet is one of five ballet companies in China and has been running now for over thirty years, recruiting some of the country’s very best dancers.

In a twist on convention De Bana’s Jane Eyre runs with the idea that Bertha Mason, Edward Rochester’s mad wife who’s kept locked in the attic, is the core of the story. ‘The only victim in this story is Bertha,’ says de Bana. ‘All she wants is love.  We don’t know under what circumstances she became mad, but since then she has been locked up like an animal in a cage; that’s why I wanted to give her some credit and make her important.  Bertha Mason is definitely my heroine.’

Described by the company’s director Xin Lili as a modern ballet, Jane Eyre should also benefit from having employed Jérôme Kaplan who designed the costumes for National Ballet of China’s extraordinary Raise the Red Lantern, which was shown to spectacular effect at Covent Garden just a few years ago.

Jane Eyre runs from August 14-18th 2013 and tickets can be booked on the eno website.