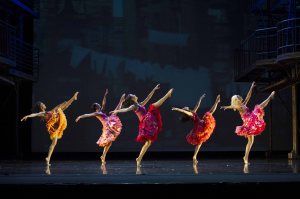 The Sharks girls on demi-pointe pointing. Photo by Alastair Muir

It’s true that Leonard Bernstein’s West Side Story has a few too many sudden emotional gear changes and that some of the language sounds horribly out of date (if you dig what I mean) but its underlying story of territorial and racial gang warfare remains just as relevant today as when it was created back in 1957.

Joey McKneely’s excellent production keeps things tightly confined within the metallic balconies of Paul Gallis’ impressively designed block of tenement flats with only the occasional photographic backdrop hinting at the wider city beyond. This claustrophobic squeezing of the action helps bring the escalation of violence into focus and creates a powerful sense of caged isolation into which the gang leaders’ deaths seem plausible, almost inevitable.

West Side Story, of course, is famous for its memorable songs (Maria, Tonight and Somewhere to name but three) and its renowned choreography by Jerome Robbins. The trick with any revival is finding young performers who can sing, dance and act and, under the supervision of both the Bernstein and Robbins’ estates, McKneely has pretty much achieved that here.

Louis Maskell is an endearing Tony with a sweetly tuned voice although he’s not completely convincing as the tough guy he supposedly once was. Katie Hall’s Maria is not exceptional but the chemistry she and Maskell create as lovers is undeniable – the final scene of Tony’s death is heartbreaking. Stealing the show from under their noses though is Djalenga Scott’s Anita. She’s captivating on stage, a wonderful actress full of Latino flair but who brings a real sense of devastation to proceedings when she’s mercilessly gang-raped by the Jets.

The cast throughout were superb; the ensemble dance set-pieces in particular were performed with huge energy and style and the singing was consistently strong. Javier Cid and Jack Wilcox as Bernardo and Riff respectively were tremendous in their roles; fierce and aggressive, they also brought warmth and humanity to their characters.

Having already played successfully at London’s Sadler’s Wells, this West Side Story is a hugely entertaining and moving experience and it runs at the New Wimbledon Theatre until Saturday 30 November 2013. Tickets are available from the theatre’s website.