Blame it on the sunshine 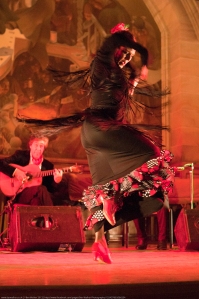 Raquel de Luna puts on her red shoes and dances the blues for Juan Martin.

As low-key an entrance as you can imagine; legendary Flamenco guitarist Juan Martin shuffled onto the artsdepot stage in his dark suit and bright red scarf and looked kind of embarrassed that we should all have turned up to see him perform. I’m not sure why – he’s amazing.

The show was a back to basics affair. Featuring just Martin himself, a singer and two dancers, there were no elaborate costumes, no fancy lighting effects and no set design. For the show to work it relied entirely on the effort and talents of the four performers.

Martin started a little shakily in his opening solo but he was soon in his stride, a gorgeous Rumba at the end of the first half and the Arabic-infused Evocacion that began the second stood out in particular. His guitar-playing is densely complex but he performs in a subtle histrionic-free way. Both his hands dance across the strings and the variety of sounds he can produce from his instrument is staggering; from chugachugging string-blocks to the sweetest of lyrical high notes he contains them all in a tight rhythmic framework that gives the music the momentum his fellow-performers can feed off.

What the dancers lacked in elegance and varied choreography, they more than made up for with lightning quick footwork. Their emphasis on footwork and minimal use of the upper body and arms should have been tedious after a while but their dynamic adherence to tempo, undeniable stage presence and cheeky plays to the audience meant that Raquel de Luna and Miguel Infante made a winning pair.

Boy, could de Luna stamp. When she thumped the floor it was as though she was stopping cockroaches from invading. The fandango solo she whizz-banged her way through in the first half brought forth an exhilarating climax uniting dance, guitar and vocals.

Infante was the tireless king of vibrating. He could vibrate his body from the soles of his feet upwards for minutes at a time – it was astonishing to see his entire body shiver unrelentingly for so long. Although his machistic bravado could be wearing at times he was captivating to watch.

With Amparo Heredia demonstrating throughout her extraordinary vocal range from whispered dreamings to the bucolic yell so associated with Flamenco, Juan Martin has put together an excellent evening of authentic Spanish music and dance. It was also lovely to see Martin joyfully show us some of his own nifty footwork as he left the stage at the close.