Dance then, wherever you may be 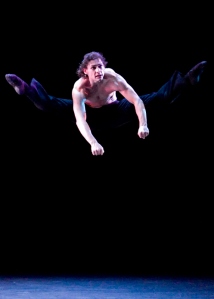 Having wended their merry way around the world since 2006, the renowned celebration of male ballet Kings of the Dance finally sets up camp in London for a short run at the Coliseum in March 2014.

It should be worth the eight-year wait, however, as the cast is extraordinary. The peerless Ivan Vasiliev leads the charge, ably accompanied by La Scala’s (and Darcey Bussell’s erstwhile partner at the Royal Ballet) Roberto Bolle, American Ballet Theatre’s Marcelo Gomes, Mariinsky Ballet’s Denis Matvienko and the Mikhailovsky’s Leonid Sarafanov.

Prepare to gasp, get ready to be amazed – this is an extraordinary chance to see the world’s greatest male ballet talents on stage together. And I’m pretty sure they’ll whip their tops off at some point too.

Kings of the Dance runs at London’s Coliseum from 19-22 March 2014. For tickets see the Coliseum website.  And below there’s a complete listing of the show’s programme and line-up (correct at time of writing but be aware that alterations are always possible)

Kings of the Dance – Full programme