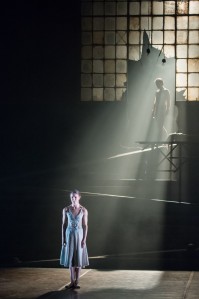 A new venue and a new outlook. Tamara Rojo has commissioned three new works for the English National Ballet from three of Britain’s brightest choreographers, including two contemporary choreographers, Russell Maliphant and Akram Khan, who’ve never worked with a classical company before. Taking the 100 year anniversary of the start of the First World War as its cue, Lest We Forget produces some extremely impressive results.

First up though was Liam Scarlett’s classically-charged No Man’s Land which magnificently explores the personal upheavals of ordinary men and women during the war. In its wonderfully told dream-like narrative there’s a devastatingly effective moment when the women hold their partners from behind which makes their arms look like the straps of the heavy backpacks the men carried with them to war. As the women desperately cling on to the soldiers as they leave for the Front they become a visual representation of the emotional baggage the men took with them too. This simple image encapsulates the restrained passion of the whole piece.

Amidst Jon Bausor’s clever set, the women then produce the weapons that would wreck the lives of so many and the soldiers return from the trenches through a broken glass wall. One by one the women dance with their returning partner, more in quiet relief than in triumph. Scarlett has the rare talent to make the music (Liszt’s Harmonies poétiques at religieuses in this case) and the choreography simultaneously bring out depths of profundity in each other, nowhere more so than in the extraordinarily powerful duet between Fernanda Oliveira and Max Westwall. In contrast the final pas de deux, where Alina Cojacaru dances with the ghost of the man who failed to return, was gentle, tender and utterly heartbreaking. 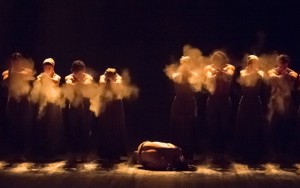 Not far short of Scarlett’s masterpiece was Akram Khan’s Dust. The company looked very much at home in his elegantly forceful choreography. Performed in front of a trench wall there was some extraordinary imagery and it took Jocelyn Pook’s subtle score into account to perfection. The opening segment where the gnarled-over Fabian Reimar was attached to two long tendrils of human arms was unforgettable – it looked like the spinal cord he could no longer straighten.

The female corps were fantastic. With Rojo leading from within they chip-chopped their way through martial art moves and super-quick spins with precision and authority. When they all formed a line and rocked alternately back and forth it looked stunningly beautiful.

Conversely the dancers didn’t look particularly comfortable in Russell Maliphant’s meandering Second Breath. But even here there were some astonishing visuals. The men being mown to the floor by the rat-a-tat of Andy Cowton’s soundscape only to repeatedly rise up to be immediately shot down again fully captured the futility of the suicidal charges from the trenches. There was also a breathtaking sequence where the women ran one by one to the men, jumped up spinning and were caught at the hips in a stiff upright position like the discarded casings of cannon shells.

George Williamson’s Firebird, the only ‘old’ item on the programme, has a tenuous link to the war and seems out of place with its fantastical story. It’s a messy ballet with an ill-defined story and weak characterisations. The one exception was Ksenia Ovsyanick – her slinky, almost reptilian Firebird was superb.

The sense of ENB establishing a new philosophy of creativity under Tamara Rojo has never been more apparent than in Lest We Forget and it was exemplified by James Streeter in Khan’s Dust. Pre-Rojo he seemed doomed to a career of only playing the Drosselmeyer’s of the ballet world. Now here he was, stripped down to the waist wrestling with Rojo in a profound duet of searing depth and poignancy. His, and the company’s, transformation is both astonishing and completely convincing.

Lest We Forget continues at London’s Barbican Centre until 12 April 2014. Tickets and all sorts of interesting information and photos can be found on the English National Ballet website.