Swan of the best 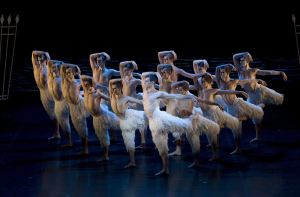 All for swan, swan for all. Matthew Bourne’s Swan Lake.

It’s nearly twenty years old now but, judging by this performance, Matthew Bourne’s famous Swan Lake hasn’t dated a bit and is still one hell of a show.

It shows Bourne at his undisputed best; clear storytelling, strong characterisations and plenty of choreography that develop the emotional undertow. Swan Lake is far less camp than most of his other works; the basic story of a Prince trying to come to terms with his homosexuality is instead brilliantly related through a generally realist, nuanced and increasingly dark portrayal that intertwines with Tchaikovsky’s brooding score magnificently.

The cast at Wimbledon were terrific. Chris Trenfield, clearly uncertain at first about his own feelings towards the Prince, was superb as the Swan/Stranger. The final scene where he defends his lover in vain from the other swans was intensely moving but he’d built up to that moment with a sensual and subtle development of personal emotion.

Liam Mower too was excellent. The Prince can seem a bit of a namby-pampy role as events swim around him out of his control, but Mower crucially kept his character’s dignity and his wonderfully terrific lyrical dancing and acting drew sympathy towards his confusion and fear.

Anjali Mehra proved herself a fine clown as the Prince’s socially inept but ambitious girlfriend, understating the slapstick comedy normally associated with the role which gave her a real pathos when she copped it in Act 3. Madelaine Brennan too charmed as the Queen, her flirtatious fumbling and refusal to loosen the maternal apron strings making the Prince’s indecisiveness seem all too plausible. The seething corps of male swans were also marvellous – they moved with a unified sense of purpose to bring the vital extra living, breathing character to the drama.

Lez Brotherston’s austere mad-house sets still look great and the small niblets of visual creativity that Bourne does so well still shine through – the knock-about humour that resounds in the Royal Box during the ballet-within-a-ballet scene is particularly acutely observed.

Bourne’s Swan Lake works so well because it moves at a level beyond being only a dance show – it’s simply a great piece of theatre that can be enjoyed by anyone. Go see it. Be moved.

Swan Lake runs at New Wimbledon Theatre until 3 May 2014. Tickets can be found on the theatre’s website.