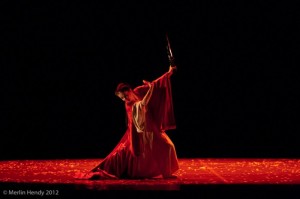 When this Madame Butterfly started it looked so much like an opera production that it was something of a jolt when the performers suddenly broke out into pirouettes rather than bursting into song. But it proved to be a fine interpretation of the tragic story of the Japanese girl who marries an American naval officer.

One of the advantages of using a famous opera as source material for a ballet is that you’re not tied to the sung words of the libretto. Therefore, while remaining true to the essence of the story, the Company’s Artistic Director David Nixon has changed certain aspects to give a different spin on things. To start with, and quite unlike the opera, Butterfly is not happy about being married to Pinkerton and makes no effort to hide it – it’s only once she gets to know him better (courtesy of a beautiful pas de deux) that she starts to fall in love. It’s a clever choreographic move because it shows Butterfly as a human being capable of making her own decisions and demonstrates how much she’s given up of herself, so making his rejection of her all the more painful.

Much briefer than the opera, the story is told very well and the orchestrated music from Puccini’s score is deftly-chosen and well-performed by the Northern Ballet Sinfonia. The staging is simple but effective and the costumes are lovely.

But it’s the collective dancing that’s most impressive. Pippa Moore’s Butterfly is perhaps not as psychologically penetrating as it might be but her technical ability is unquestionable. The same could be said about Kelley McKinlay’s Pinkerton – he and Butterfly never completely convinced as lovers that one of them would die over.

Matthew Koon’s irrepressible Marriage Broker stood out for his exuberance while Lucia Solari as Pinkerton’s wife gave the most insightful performance but had too short a stage time to make a big impact. And that’s what I mean about the collective dancing; while no-one was truly outstanding, neither was there any weak link. It made for a terrific night’s entertainment.

To bolster the show’s running time Christopher Hampson’s Perpetuum Mobile acted as a kind of overture and showed the Company’s pure classical prowess. Bach’s Violin Concerto in E Major was the musical diagram that the dancers laced their pretty patterns over. Their clean, crystalline technique looked effortless and of particular merit was the long pas de deux between Javier Torres and Lucia Solari in the middle movement; Torres was a superbly strong partner while Solari revealed an authoritative command of her vocabulary.

In short, Northern Ballet are a damned good Company.

Madame Butterfly with Perpetuum Mobile runs at Richmond Theatre until 10 June 2015 before continuing its UK tour. The Northern Ballet website has more info about venues, dates and tickets.