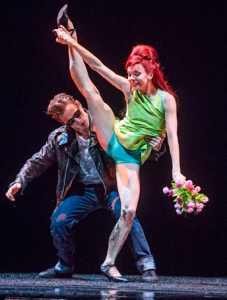 Ah, that increasingly trodden path of transition from ballet superstar to contemporary dancer. It’s rarely a successful one but that doesn’t stop people trying and Royal Ballet ballerina extraordinaire Natalia Osipova is the latest to give it a bash.

Three of the world’s highest profile choreographers have been employed to give her a hand with three world premieres but that doesn’t necessarily help. Sidi Larbi Cherkaoui opens the night with a trio called Qutb which mostly involves Osipova and two fellas unwinding their intertwining bodies during some kind of solar eclipse.

While her two cohorts are very familiar with Cherkaoui’s fluid, drifting movement, Osipova comes across as a bit stiff and unusually cautious when it comes to awkward lift changes. That said, her extraordinary ability to stretch her limbs to extremes allows the remarkable strength of Jason Kittelberger to help them forge spectacular new shapes together during a prolonged duet. Unfortunately, the work as a whole was slow, laboured and went nowhere.

Russell Maliphant’s elongated pas de deux Silent Echo was the show’s highlight. Full of cut-off leaps and sharp landings that led to frighteningly quick spins it allowed Osipova to credibly express a different style of movement. Sergei Polunin didn’t fare half so well. Despite his incredible stage presence and the sheer joy of watching him leap into the rafters, the classical vocabulary he entertained just didn’t fit with the subtle tones of everything else in the work.

The big finale was a big let-down. Arthur Pita is usually such a good storyteller but Run Mary Run, a flashback tale of young love in the 60s, was baffling – I’m still not sure if Polunin’s character died from a heroin overdose or from exhaustion while pushing a swing. The funny parts worked the best; the 60s go-go dance was a giggle and the fag and booze duet was a happily wagging finger in the face of political correctness.  Ultimately though, there were too many passages where little happened and there are only so many times you can watch Osipova and Polunin fall ever-so-sweetly in love before starting to feel a little nauseous. At least the 60s girl-band soundtrack was awesome.

Not a great night out all told but Osipova demonstrated she does have potential in the contemporary field, parts of Silent Echo revealed that. And if that thought excites you (and in the long-term, it probably should) this show is not only returning to Sadler’s Wells from 27 September to 1st October 2016 but has also found a home at the Edinburgh Festival Theatre (12-14 August 2016) and will be flying out to New York in time for 10-12 November 2016.