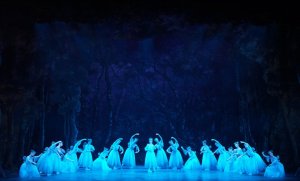 I couldn’t find any pictures from the Xander Parish night of ENB’s Giselle so I plumped for this one of the Wilis instead. It’s lovely isn’t it?

I watched Mary Skeaping’s Giselle for the first time just a few days ago and came to the conclusion the first act wasn’t terribly exciting (if you’re interested, you can read the full review by clicking on this link). Having watched it again I feel the same and can only put it down to the fact that, apart from a few hops and skips, there’s no dancing at all for about twenty minutes. When it does arrive it’s in the form of a peasant pas de deux which is nothing to write home about.

No matter, really, because the second act is very good and this performance had some fabulous role debuts, chief of which was that of Xander Parish as loverboy Albrecht. He was awesome. Even dressed as a peasant he can’t help looking like a Prince – his bearing and charismatic stage presence speak volumes of his Royal Ballet training and Mariinsky career, and he just bossed proceedings.

He succeeded in making Albrecht a sympathetic character; he seemed so nice that it felt impossible that he’d deliberately cheat on Giselle and he somehow gave the impression that his impending marriage to Bathilde was an unwelcome, perhaps forced, one. The consequence was that his dealings with Giselle were unbearably sad and touching.

And his dancing? His grand jetés simply floated and his footwork dazzled – his solo variation in the final pas de deux was breathtaking. Not only that, he was a great partner who was strong in support and always ready to let Giselle have her moment. A true gent, in other words.

While never having danced in this production before, Parish has played Albrecht elsewhere, notably at the Mariinsky. Lauretta Summerscales had no such luxury – this was her very first Giselle and a fine job she made of it too. She came across as a hopelessly naive girl, overjoyed at the romantic attention offered her, but played it with such natural charm that you revelled in her happiness and suffered at her distress. Her partnership with Parish had real chemistry but she held the stage when left on her own; her delicate dancing superbly reflected her character’s sweet nature

The final debut came from Dutch National Ballet’s Michaela DePrince. Her Myrtha was implacable, impervious to all pleas and utterly focussed on her job of rounding up men; she was quite chilling at times. And her jump! It was impossibly high and apparently indefatigable. She was a joy to watch, though preferably from behind a sofa.

Elsewhere the corps were exemplary again, the character actors believable and the orchestra were assured in their reading of the score. It all made for a very memorable show.

English National Ballet’s run of Mary Skeaping’s Giselle continues at the London Coliseum until 22 January 2017. Tickets can be found on the ENB website.