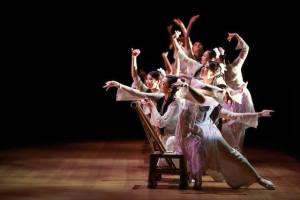 This was my favourite part of Hong Kong Dance Company’s The Legend of Mulan. Watching it could be quite armful, mind.

For Hong Kong Dance Company’s The Legend of Mulan, we were promised a mix of contemporary, ballet, Chinese Classical dance and martial arts and that’s exactly what we got. Unfortunately, we also received large doses of repetitiveness, empty posturing and narrative bafflement. A level beyond all that was possibly the worst music I’ve ever heard set to a dance piece – a hideously synthesised movie-style epic more conducive to ordering Special Fried Rice at the local Chinese restaurant than being a vital ingredient in an internationally touring show.

The story of Mulan is a classic of Chinese culture but here it seemed to boil down to a woman joining the army, feeling sad because she left her Dad at home and then participating in a long, long war that involved the army fighting an invisible adversary. The entire second half consisted of her feeling a bit homesick and then arriving back home, whereupon a petal shower took place.

Often simple stories work best with dance but here Yang Yuntao simply provided no choreographic emotion with which to fill the gaps between narrative yardsticks. Instead there was an endless series of heroic tableaux and a tiring array of acrobatic leaps and extensions whose main duty appeared to be that of filling time.

It wasn’t all bad, of course. The dancers themselves were decent; the men took on their acrobatics with relish and there was a lovely scene with some white-robed women working looms (I think they might have been friends or servants of Mulan, it was difficult to tell). Best of all was the lady playing Mulan herself, Pan Lingjuan. Incredibly versatile, she skipped through the various strands of choreography without missing a beat, could twirl a staff like a helicopter and didn’t knock out six ‘o’ clock extensions so much as ten past six extensions. Her closing, classical Chinese solo was the closest things got to a genuine outpouring of feeling and showed off her exquisite arms and fingers to boot.

I can’t deny it was a disappointing show but I really hope the dancers are given the opportunity to come back and perform in London again. The Company has been in existence since 1981 so they must have better repertoire up their sleeves.