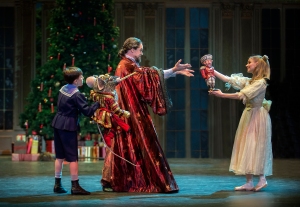 As ever there are plenty of Nutcrackers inhabiting London’s theatres this year and even Birmingham Royal Ballet [BRB] have upped sticks from the Black Country for a week to show what they have to offer. The cavernous Royal Albert Hall was their host which meant bigger audiences but also a whole new approach to how they stage their much-loved production. John MacFarlane’s lovely costumes are still there but apart from a few props, that’s about all that remain of the visuals.

Rather than perform in-the-round as English National Ballet have done at the same venue with Swan Lake and Romeo and Juliet, BRB have created a sort of semi-stage with the audience covering half of the Promming floor, with more of the audience where the wings would normally be. The amplified orchestra is perched up on a raised platform behind the stage and there is a mirrored wall at the back whose individual panels can be rotated to allow people and props access to the stage. There’s also a wing on either side of the stage which involves quite a jog for the dancers to get into. Got all that?

The first act works quite nicely. Kids run around, old people dance, some weird automatons do funny things with taut limbs, soldiers march and rats wave their claws about to no great effect; you get the gist. The transformation scene doesn’t dazzle the eye – the Christmas tree only grows on vast projections beamed onto the back wall – but you get the idea. The best bit is the snowflakes where it snows, and I mean, it pours, even on parts of the audience. In short, the trickily large space of the Royal Albert Hall is used pretty well.

Sadly, in the second half, it isn’t. Apart from some extraneous projections on the back wall and some distracting (if beautiful) lighting the dancers perform in front of the same mirrors we’ve already grown used to. The sense of being in a marvellous place it’s taken the entire interval for a giant swan to fly to, is absent – all the magic is in the first half.

Also, to be honest, the company were not dancing on top form. The snowflakes were good, the Mirlitons mirled merrily, Céline Gittens was lovely in the Waltz of the Flowers, Max Maslen, Lachlan Monaghan and Gus Payne made a striking trio in the Russian Dance and Karla Doorbar’s Clara hit all the right notes of innocent cutesiness, but apart from that, things felt a little flat. Even César Morales was a little underwhelming as the Prince although Momoko Hirata looked terrific at times as the Sugar Plum Fairy.

Despite everything, it’s still an enjoyable show and as the company bed in to the vastness of their temporary home, I’m sure the dancing will project in a more enticing way.

Birmingham Royal Ballet’s The Nutcracker runs at the Royal Albert Hall until 31 December 2017. Tickets can be found on the RAH website. Whatever you do, don’t use ViaGogo.