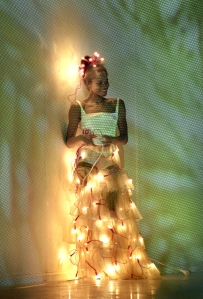 You are the sunshine of my life. Regina Advento lights up Agua. Photo by Iko Freese

A real tale of two halves emerges from São Paulo in this edition of World Cities 2012. Pre-interval the pace of Agua was akin to a smooth and silky bossa nova whereas post-interval it wound up a gear to the emotional tempo of a batucada.

Once a squelchy orangey kiss was out of the way, Jorge Puerta Armenta and Damiano Ottavio Bigi slithered into a slippery duet of slides and swings, women threw handstands over men’s arched backs and the best pool party ever emerged before our eyes, complete with comedy naked towels and soft samba couplings.

Peter Pabst’s all-consuming video projections threatened to overwhelm events on the stage at first but later, when the screens lifted 8 feet or so to reveal a ring of rubber-tree plants, things settled down. This is something Tanztheater Wuppertal Pina Bausch do so well; transforming simple staging ideas into something remarkable with a sudden shift of perspective. One moment it felt like we were in an i-max, cinema, then in a wild jungle clearing and then at a sophisticated garden party, all achieved with a handful of props, an abundance of imagination and a perceptive eye for effectively blurring visual and intellectual boundaries.

The second half rattled by (the sight of Ditta Miranda Jasjfi being gleefully whizzed around in a wheelbarrow can only bring a smile to your face) and was closed by a mouth-spray water-fight that centred around Regina Advento’s gorgeously swaying hips.

Brasil looks so much fun.